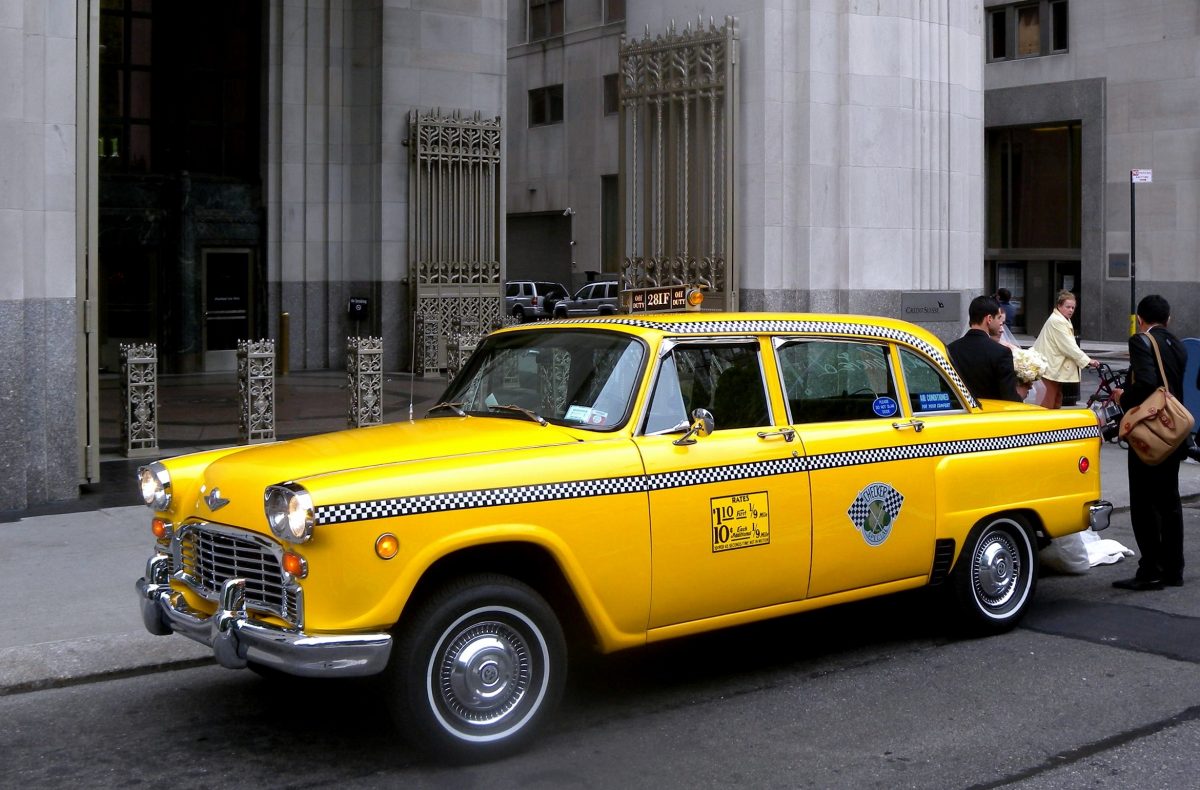 One of the more ubiquitous symbols of a city are its taxicabs.  London is known the world over for its black cabs.  Hong Kong is known for its color-coded fleet of Toyota Crowns, and Indian cities have 1950s-vintage Hindustan Ambassador cabs plying their lanes.  New York is well represented by the yellow cab.  These conveyances form a crucial piece of the city’s transportation network, giving native and visitor alike a bumpy experience on their way between points A and B.

Cabs were first instituted in New York when horses still strode through the city.   Motorized taxis replaced carriages in the early 20th century.  Until Mayor LaGuardia was elected in the 1930s, the industry was largely unregulated.  During the height of the Great Depression, the city instituted a system of medallions to cut down on the number of taxis in the city (it was estimated that over 30,000 cabs were on the streets, with many not being able to collect any fares).  In 1967, the color of the cabs was set as yellow to make official taxis instantly recognizable (according to one legend, it was the police commissioner’s wife’s favorite color).  Yellow cabs tended to concentrate in Manhattan and around the two airports in the city, leading to vast areas of the city being underserved.  This led to black livery cars (illegally) picking up fares in the outer boroughs and Uptown Manhattan.  The advent of the borough taxi program in 2012 led to a fleet of lime-green taxis allowed to pick up in the Outer Boroughs and in Uptown Manhattan in order to bolster cab numbers and bring on-demand transportation to these areas.

Current estimates state there are over 13,000 cabs in the city.  They are regulated by the city’s Taxi and Limousine Commission.  These include both yellow and borough cabs.  In recent years, taxis have been facing increased competition from rideshare services, bringing the value of medallions down (which were at one point in the millions).  In the mid-20th century, many cab drivers were driving as a way to make extra money or as a second job.  Today, most drivers are recent immigrants to the city and country.  Although not of note to most visitors, city law prohibits cars used as cabs from serving in that capacity for more than five years, regardless of mileage.

You may be using a cab to arrive at or leave from a Sights by Sam tour.  Remember when riding in a taxi to buckle up, note the number of the cab (which will follow a 1A23 format if yellow or AB123 format if a borough taxi).  You should also remember to take your items with you as they may not be found again if you leave them.  It may also be hard to hail a cab between 4 and 6 PM (as this is during a major shift change for most cabs).  Despite rumors to the contrary, most cabbies are courteous and know where they are going.