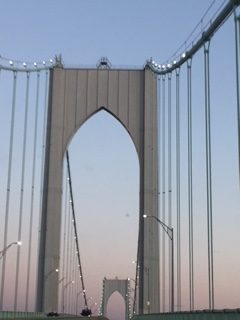 Although there are probably more people living in some neighborhoods in New York than in Newport, Rhode Island, the cities share many commonalities that might not immediately meet the eye.  While Newport is mostly a colonial-inspired city, it has many interesting similarities with New York.

For starters, an obvious similarity is that Newport was for a long time the society capital of America, with many wealthy New York families summering at the beaches and shores there.  The Astors and Vanderbilts were among two of the more prominent families who had large estates in Newport, which today are sumptuous museums rivaling such mansions as the Frick Collection in New York.  As a result of the wealth of historic architecture in both cities, the Landmarks Preservation Commission in New York and the Preservation Society of Newport County both hold sway in important building decisions and protect resources that are appealing to tourists.

Aside from the high society connection, New York and Newport were also cities founded relatively early in the part of the history of European settlement in the Americas.  Both were major ports, but New York would remain the larger city of the two throughout the Colonial Era.  As major port cities, many ethnicities and religions would come through each locale.  This is evident by the fact that Newport, RI, and New York contain two of the first Jewish congregations in what would later become the United States (in the Touro Synagogue and Congregation Shearith Israel, respectively).  The cities also contain notable Episcopal churches, coincidently both named Trinity Church.

The similarities also extend to the manner of entering or leaving each city, as there are great suspension bridges serving as gateways—namely, the George Washington Bridge in New York and the Claiborne Pell Newport Bridge in Newport.  Learn more about how Newport, RI, and how your city can be found in New York City with Sights by Sam.