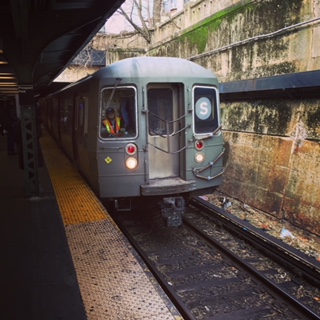 New York, like London and Hong Kong, has subway shuttle lines.  These lines, unlike the others in the system, shuttle between only two (or sometimes up to five) points on the system.  While many of the regular numbered and letter trains of the NYC subway system function as shuttle trains after hours, there are three dedicated shuttle services on the system: one in Brooklyn, one in Queens, and one in Manhattan.  The three services also correspond with the former subway companies that serviced the city: the BMT, IND, and IRT.

The Brooklyn service is the Franklin Avenue Shuttle.  This line links about two miles between Prospect Park and Franklin Avenue.  The train links BMT, IND, and IRT services together between four stops and provides a great way to get to Prospect Park and Bedford-Stuyvesant.  Once part of a late 1800s railroad, this shuttle was truncated in 1963.  Known for most of its history for its low ridership and accidents from time to time, the Franklin Avenue Shuttle was rebuilt extensively and is unique as it is the only line on the system that is single-tracked.  The service also uses two-car trains due to its diminutive ridership levels.

The Queens shuttle is important, linking a stop on Broad Channel to Rockaway Park, a distance of two whole miles being covered with only five stops.  This shuttle has been in operation since 1956 and connects some of the farthest-flung communities in the city to the rest of the system.  While the shuttle could be impacted by hurricanes (as happened during Hurricane Sandy), the Metropolitan Transportation Authority worked hard to bring the line back up to code and operational again.

In terms of the shortest shuttle ride—and the most famous—there is the 42nd Street Shuttle.  This line operates at all times, excluding late nights, and covers 2700 feet in less than two minutes.  Originally part of the IRT subway line, the 42nd Street Shuttle was configured in 1918 and has kept its form since then. The shuttle’s line was part of the original IRT line that ran between City Hall and Lower Manhattan to 145th Street in Upper Manhattan via Grand Central and Times Square on 42nd Street (where the shuttle currently operates).  One of the more interesting proposals for the line that never came to pass was the idea to replace it with a conveyor belt system.  A fully automatic train was put into use on the shuttle for a brief time in the 1960s, but was withdrawn due to cost issues and a fire in the shuttle passage.  The shuttle today is known for its train interiors wrapped in advertisements, as it is one of the busiest in the system.

The shuttles on the NYC Subway are some of the more unsung heroes of the system.  Although they are not the subject of famous songs (such as Take the A Train), these lines help to alleviate pressure on the others of the network and to get people between lines more expediently.  The rides on these trains are also unique among the various subways of New York for their scenery and riders.  Catch the best tours of NYC (transit-focused upon request) with Sights by Sam.