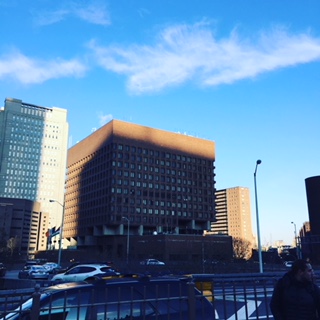 The New York Police Department (NYPD) forms the largest law-in-order organization in the city.  The organization has over 35,000 officers working to keep the city safe—and residents can rest easy knowing that these officers can boast their territory as one of the safest large cities in the country. Their department works from an imposing structure in Lower Manhattan—One Police Plaza.

Built in 1973 by Gruzen and Partners, One Police Plaza’s design is what is called an “inverted pyramid”, meaning the building narrows at the bottom and widens skyward.  The building’s  “brutalist” style showcases many small windows and large exterior panels, two features that help the structure create an imposing dominance over its surroundings.  Not only the location of the NYPD commissioner’s office, One Police Place is also home to the department’s advanced computer equipment, among other commands.  And beyond the building itself, there is a neighboring plaza with a small public art piece composed of five interlinking circles—each for one of the five boroughs.

Most people have a passing familiarity with this seemingly anonymous building, as it features prominently in the TV series Law and Order.  The building itself has a smaller role in many films and other TV series such as Brooklyn Nine-Nine.  For a commanding tour, see New York City with Sights by Sam.