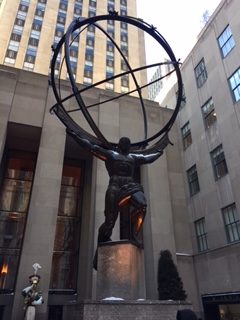 New York City is the home of some of the greatest statues in the world.  Among these are the Statue of Liberty in New York Harbor and Civic Fame atop the Manhattan Municipal Building.  One of the most famous ones in the city is near Rockefeller Center and literally has the world on his shoulders.  The statue of Atlas is iconic and a distinctive part of the center’s architecture.

Placed in the courtyard of the International Building, “Atlas” began shouldering the world’s burdens in 1937.  The principle sculptor of this statue was Lee Lawrie, an artist who had hundreds of commissions over his lifetime (including another one at Rockefeller Center that can be seen on a Sights by Sam walking tour).  Rene Chamberlain also helped to sculpt the statue, which depicts the Greek titan holding the globe on his shoulders.  The towering “Atlas” weighs seven tons and is 45 feet tall.  One of the unique features about the sculpture is the fleur-de-lis that denotes true north in his globe.

The statue is also known to millions of fans of Atlas Shrugged, as it graces the cover of most versions of Ayn Rand’s best-selling novel.  In addition to this statue being a landmark, it is across from St. Patrick’s Cathedral in Midtown Manhattan, with many visitors to the city taking pictures with both landmarks at the same time.  This is the type of towering information you will learn on a Sights by Sam walking tour of NYC.