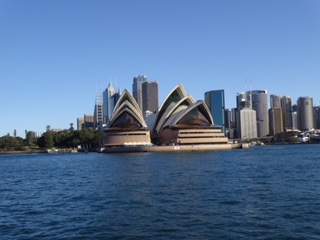 Occupying a place in similar stature to New York in the Land Down Under, Sydney is very similar to NYC in many ways.  Beyond the superficial point that they are the largest cities in their respective states and countries and were also major cities within the British Empire at a time, New York and Sydney both have many similarities, as elaborated upon below.

Both cities are at the center of fine harbors, some would say among the finest in the world.  In addition to the many tons of cargo and passengers that come through these harbors, they are also bridged by some of the greatest bridges in the world—in fact, the Sydney Harbour Bridge is said to be designed off of the Hell Gate Bridge over the East River (it is said that the Sydney Harbor Bridge also inspired the Bayonne Bridge).  A newer bridge across Sydney Harbour, the ANZAC Bridge, is a cable-stay bridge—which is the new trend in bridge building in New York—with the new Kosciuszko Bridge and new General Goethals Bridge also following suit with this design.  Each city is moreover known for its performing arts campuses, namely the renowned Lincoln Center in New York and the recognizable Sydney Opera House (the single-busiest performing arts campus in the world).  As each city has thankfully not been involved in war for a long time, there are buildings from different time periods in each locale (and great, historic meeting places for their city councils).

In addition to the physical similarities between the cities, both sprawling metropoles are very diverse in population, as each city is a major entry point into its respective country.  Each city has residents from all over the world as well as some of the best places to eat.  If the urban jungle is not one for visitors, each town also boasts vast natural beauty only a short train ride away (via an extensive commuter rail system).

Both New York and Sydney are leaders of their countries in many ways and full of landmarks within their own rights.  As a final superlative, both cities are linked together on one of the longest flights in the world.  This is the type of information you will learn on a Sights by Sam walking tour to see Sydney (or any city) in New York.