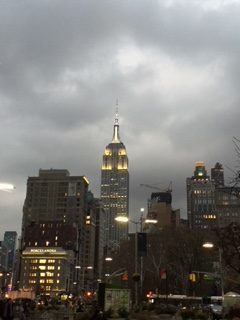 As mentioned in one of our first blog posts, the Empire State Building is one of the most famous landmarks of the city.  Aside from its observation deck, its place in the popular mind due to movies and television, and its handsome Indiana limestone exterior, the Empire State Building is also famous for its lights that announce the building across the city and beyond.  For many, the lights are a symbol of New York.  Often in the signature “empire white”, the tower lights are one of the most recognizable symbols of Manhattan.

The first time the Empire State Building was lit up was when a searchlight was turned on in 1932 to signal that New York State governor Franklin D. Roosevelt had been elected as president.  In the 1950s, white beacon lights were turned on the tower and remained a nightly feature until the 1970s.  In 1976, colors were added to the lights when red, white, and blue were lit up to celebrate the American Bicentennial.  Tower lights are turned off at 2:00AM every night.  While the tower’s lighting patterns began to commemorate holidays or other momentous occasions, controversies arose over some of the occasions being honored, leading to patterns being vetted after 2006.

In 2012, the lighting system of the Empire State Building was renovated.  This new combination  replaced 400 lamps that could display nine colors to 1,200 lamps displaying 16 million colors.  While most color combinations are in three pieces, there can be multiple color combinations projected.  In recent years, the lights have been dimmed or turned off in spring or fall so that birds migrating through New York City do not hit the building and die due to the bright lights of the tower.  Learn enlightening facts about NYC on a Sights by Sam walking tour.