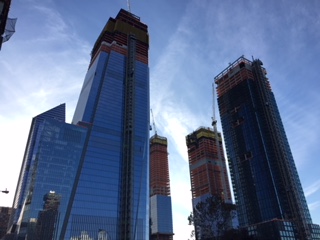 New York is indisputably the largest city in the United States.  As with most large cities, there are several centers for jobs.  Already, the city contains three of the largest business districts in the city (Lower Manhattan, Midtown Manhattan, and Downtown Brooklyn).  In addition to these commercial areas, there are several other developments classed as “cities within the city”.  Two of these districts immediately spring to the minds of many New Yorkers: Rockefeller Center and MetroTech Center in Brooklyn.  At the moment, a new 28-acre development, the largest of its type in the United States, is under construction.  When completed in the mid-2020s, Hudson Yards is expected to be a major new district and a “city within a city” in the densest part of New York City (Midtown).

The Hudson Yards development is being constructed over the rail yard for Penn Station.  This area had long been one of the last undeveloped areas of Manhattan, with the Javits Center being completed as the only part of various master plans to add civic, commercial, and residential space on the island.  In preparation for an attempt to host the 2012 Olympics (won by London),  the far west side of Manhattan was rezoned by the City Council.  This paved the way for development (first for an Olympic Stadium and then a stadium for the New York Jets NFL team).  After bureaucratic hurdles were cleared, construction began on 16 skyscrapers that will cover millions of square feet of commercial office, retail, and residential space.

When fully completed at some point in the 2020s, Hudson Yards will sport two large buildings over 1000 feet tall (30 and 35 Hudson Yards).  In addition to corporate headquarters, the development will also have shopping, an observation deck, and a large public plaza (with a distinctive public art structure in the middle of said plaza).  The Hudson Yards will also be easily accessible from the High Line linear park.  The development can be seen on an “Architecture: Building New York” walking tour through Sights by Sam, or by a personalized tour of the area.