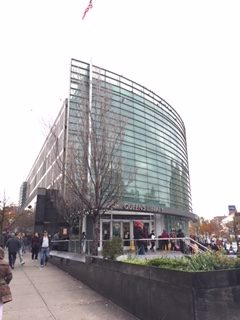 Near the borders of New York City lies one of its fastest-growing neighborhoods.  Flushing, long a famous but sleepy area of Queensboro, has now become one of the most famous and popular parts of the city.  With the district becoming the largest of New York’s three Chinatowns, it is rising up as the center of Chinese life in town. In addition to its new cultural status, Flushing also has a storied history.

Founded in 1654 by the Dutch, the town was named after the town of Vlissingen in the Netherlands.  In 1657, Quaker settlers were prohibited from practicing their religion by the Dutch Governor of New Amsterdam, Peter Stuyvesant.  This action led to protests from the residents of the hamlet, petitioning the Dutch for the free practice of all religions.  The petition would later be called the Flushing Remonstrance (and serve as an inspiration to the First Amendment of the U.S. Constitution).  The Quakers still meet at the Old Flushing Meeting House, the oldest continuously-used religious site in New York City.  After the English conquered the area in 1664, the name Vlissingen (like many areas of the city such as Harlem, Greenwich, and Gramercy) was anglicized to Flushing.  The town would be incorporated into Queens County, and after heavy settlement began in the late 1800s, the population boomed in the early 1900s when the IRT 7 line was completed.

Starting in the 1970s, Chinese immigrants from Taiwan and later Mainland China started to settle in the district, which was previously populated by Italians, Germans, and Jews.  These Chinese immigrants did not have much in common with the Hong Kong and Cantonese immigrants who had settled for over one hundred years in Manhattan Chinatown.  As people from all over China came to emigrate to Flushing, a Korean community developed as well, leading to a sizable Koreatown forming in the district.  In addition to having many great restaurants and shops with Asian goods, Flushing also has a beautiful library building that is the unofficial center of the community (and one of the busiest within the city).

Sights by Sam is happy to provide a tour of Flushing in conjunction with the nearby Flushing Meadows-Corona Park.  This is the type of information you will learn on a Sights by Sam tour.