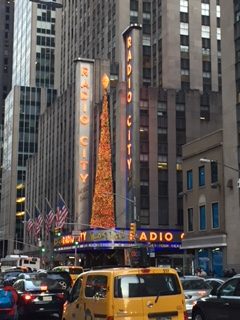 Midtown Manhattan is known for its theaters—especially those showing Broadway productions.  While theater on the whole is one of the main economic generators for the city, one of the most famous hosts not Broadway shows nor classical music shows, but song and dance spectaculars.  This is the famous Radio City Music Hall.

The 6,000-plus seat theater was designed and built with the rest of the complex in the 1930s.  It was the idea of Samuel Rothafal, who was responsible for the design and promotion of several other theatrical venues in the city.  The structure was designed by Edward Durrell Stone and its interior designed by Donalds Deskey.  As it was going up in the 1930s, it was built in an Art Deco style, with the backdrop to the main stage mimicking a sunset.  As the event was meant to have movies, concerts, and other events, it contained a complex system of elevators to raise and lower bands and orchestras onto the main stage.  It is alleged that the U.S. Navy copied the system in the concert venue on Essex class carriers during World War II.

For much of the venue’s history, Radio City Music Hall showed movies along with stage spectaculars.  After a decline in the 1970s, the venue was declared a City Landmark and was placed on the National Register of Historic Places.  It was renovated in the 1980s and now mainly is home to concerts, award shows, and song-and-dance spectaculars, the most famous of which is performed during the winter holiday season.

With its famous architecture, Radio City Music Hall is often a must-see for many first-time visitors to New York and a window into a somewhat bygone era.  This is the type of information you can learn on a Sights by Sam walking tour.