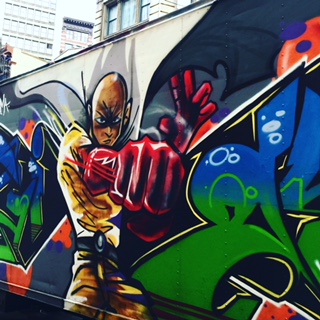 New York is one of the largest ports in the United States and a point for cargo coming into and leaving the country.  As an island and at the entrance of the Hudson River, the position of the city forms a natural choke point for passengers and especially freight heading to Upstate New York, New England, and Long Island.  This article will cover some of the freight infrastructure that keeps New York going.

As mentioned on many Sights by Sam tours, the Port Authority of New York and New Jersey (PANYNJ) operates the seaport of the region.  The port, which is concentrated on Staten Island and around Newark and Elizabeth, New Jersey, handles millions of tons of cargo per year.  As it has grown, the PANYNJ may expand port operations for a small berth in Brooklyn at the historic Red Hook piers, which was the site of break-bulk cargo operations (and is famous for being where On the Waterfront took place).  The port has also been expanded to handle post PANAMAX ships (a project that included raising the Bayonne Bridge from 155 feet high to 215 feet high).

In terms of freight rail, the most famous piece of infrastructure is the High Line linear park (which can be seen on the “Architecture: Building New York” walking tour from Sights by Sam).  As New York is dense and on islands for the most part, it is not the easiest place to operate a freight railroad.  Before the opening of the Holland Tunnel, rail ferries were popular for freight—passengers had to take ferries from New Jersey rail terminals until the Hudson and Manhattan (today the PATH train) and the Pennsylvania Railroad tunnels opened in the early 1900s.   While the PANYNJ does operate a ferry for rail cars to move from Jersey City to Brooklyn, it remains little-used compared to truck traffic and mostly is used to load and send the city’s garbage to landfills in distant areas.

On the subject of trucks, New York would stop without the army of trucks hauling 400 million tons of cargo into the city annually.  Of late, there has been a large increase in the use of trucks due to the proliferation of online shopping and home delivery services, both of which employ delivery vans to come directly to a consumer’s building.  As there is a prohibition on most 18-wheelers in the Holland and Lincoln Tunnels, the vast number of goods vehicles are box and medium trucks, in addition to customized vans.  The number of them has been increasing and has led to calls for limits on their loading times—they frequently double park on busy roads and must be driven carefully to avoid hitting people, bicyclists, and other motorists.  The NYPD issues thousands of dollars worth of fines daily to these conveyances (with some delivery companies settling out of court every year with the city regarding their summonses).  A freight rail tunnel has been proposed by Manhattan and Bronx politicians to reduce air pollution in their districts, but the measure is opposed by political interests in Brooklyn and Queens, as they feel the truck traffic will simply migrate over to them.

As you visit and walk around the city, remember that all of the consumables, goods, and other objects had to arrive in town somehow.  Since its founding in the 1600s, New York has been a center of trade and freight transportation.  The city and other regional governments are working to ensure that New York remains competitive with other freight handling centers into the next decades.  This is the type of information you will learn on a Sights by Sam tour.