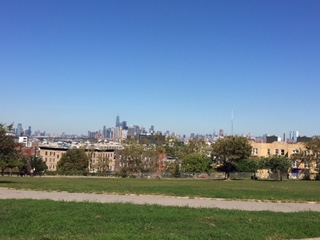 New York is a city full of great parks. Every borough contains such treasures, but one of the best can be found in Brooklyn. Although Prospect Park is the most famous of the parks in the Borough of Champions, Sunset Park sits on a beautiful, nearly-25-acre plot that provides commanding views of the surrounding neighborhood and views of Manhattan.

The neighborhood developed in the 1800s with the creation and development of the port of Brooklyn and nearby Industry City. When the port was working at full steam from the middle of the Antebellum Era through the end of World War II, it attracted many Scandinavian immigrants who settled in the immediate area (so that they could work at their jobs at the port). This settling activity led to the spread of cooperative housing in the neighborhood (and later throughout the city). There was a lot of port activity at the Brooklyn Army Terminal. The neighborhood began to decline after World War II with a downturn at the port and the completion of the Brooklyn-Queens Expressway.

The Scandinavian population left and the neighborhood became populated by Latino people. They would be joined by Chinese in more recent decades who have established a lively commercial district along 8th Avenue. The main attraction of the neighborhood is of course the park, which was established in the 1890s. It is perhaps most famous for its grand vistas and recreation center built in 1936. This is the type of information that you will learn on a Sights by Sam walking tour. To see the fabulous park and to explore this great neighborhood, contact Sights by Sam at +1 (917) 242-8421 or through sightsbysam.com to book a custom tour today.