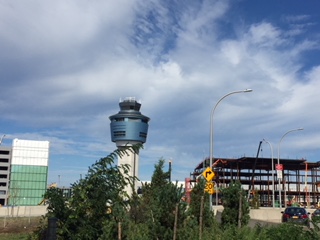 Visitors to New York come into the city in several different ways. For visitors coming from Denver and cities east of the Rockies, many will arrive at LaGuardia Airport. While many believe that the airport does not provide the best introduction to the city (some people say, “the only good thing about it is whom it is named for”), LaGuardia Airport has a storied history and is looking toward a better tomorrow.

In 1929, an amusement park in Queens on the water in Elmhurst was demolished to build a general aviation airfield. This airfield would later be pressed into commercial service in the 1930s when Mayor Fiorello LaGuardia of New York was returning from a meeting by airplane. His flight landed at EWR airport in Newark, NJ. LaGuardia was upset that his ticket had said “New York”, but the aircraft landed over 15 miles away in another state. LaGuardia had the pilots land their aircraft (after the other passengers had disembarked) at Floyd Bennett Field in Brooklyn, where he held a press conference exhorting the need for an airport in the city. It would not be long before the small general aviation field would be expanded and named after Mayor LaGuardia (against his wishes). LaGuardia Airport was sited on the Long Island Sound, as many flying boats flew internationally in those days (the Marine Terminal at LaGuardia is testament to this). Over time, LaGuardia grew too busy to handle the traffic and the city began quietly buying up land (and the Idlewild Country Club) in Jamaica, Queens to build a second, larger commercial airport (now the well-know JFK International Airport).

Today, nearly 30 million passengers fly into the airport. The cramped four terminals are often the subject of complaints by angry travelers and civic boosters seeking a larger, more orderly, and spacious facility. The Port Authority of New York and New Jersey (owners and operators of LaGuardia Airport since 1947) has planned a $4 to $5 billion construction effort to tear down three of the separate terminals and combine them into one continuous, modern facility. Additionally, the airport will be connected to the NYC subway’s 7 train via a people-mover system. Construction began in 2016 and is expected to conclude in the early 2020s. This is the type of information you will learn on a Sights by Sam walking tour. Alternatively, you can soar through Queens on a privately-led Sights by Sam tour of nearby Flushing Meadows-Corona Park or the Louis Armstrong House—to name but two great sites near the airport.