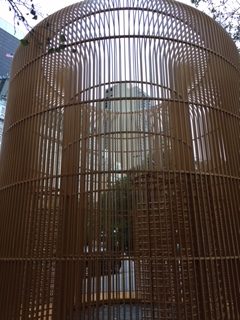 In addition to having some of the greatest museums in the country and the world, New York is blessed with an abundance of public art. Many artists are drawn to the city (and arts are funded by both private donors as well as the local government). This leads to many great public art displays (sanctioned by the government, companies, property owners, and some unsanctioned displays). Public art can be seen in all five boroughs.

The city has been the site of several large public art installations. These have proliferated since the early 1980s when the city passed a “Percent for Art” law in 1982 that mandated that city-funded construction projects must have a set-aside of one percent of the budget for public artwork. This is also supplemented by a similar program by the Metropolitan Transportation Authority (MTA Arts and Design). What this means is that there are many art installations and pieces in front of city-owned buildings and in subway stations. Over the years, several have been controversial, such as a sculpture in the Civic Center called Tilted Arc, which was a 120’ long block of cor-tenn steel across a plaza, which was removed after a court trial. One of the most famous pieces was done in 2005 by artists Christo and Jeanne-Claude in Central Park called The Gates, which contained 7,503 orange gates spread throughout the park.

Much of New York’s public art not found in front of city-owned buildings or sponsored by companies can be traced to the work of the city’s Public Art Fund. Founded in 1977 by Doris C. Freedman, the Public Art Fund is a nonprofit organization that seeks to bring public art to spaces across all five boroughs. The goal of the organization is to bring contemporary art to the population of the city. A popular space for the public art fund to exhibit its works are at the entrance to Central Park at Grand Army Plaza in Manhattan and at Brooklyn Bridge Park near the eponymous bridge. Some of the most famous/most talked about pieces include New York City Waterfalls in 2006 and the 2017-2018 Good Fences Make Good Neighbors sculptures by Ai Weiwei.

As New York is full of art, visitors are able to see art on any Sights by Sam tour. Reserve your place on one of the exciting Sights by Sam walking tour by calling +1 (917) 242-8421, or through sightsbysam.com today.