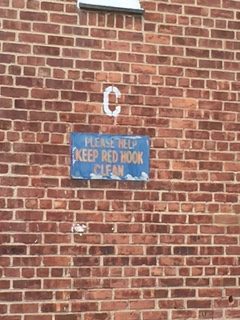 On the western edge of Brooklyn lies Red Hook, a former shipping area. Known for its starring role in movies and for its industrial appearance, this neighborhood is now on the rise after decades of neglect. The neighborhood is now sporting many new businesses between older industrial facilities that once served the main port of the East Coast of the United States.

The Dutch were the first Europeans to settle the area in the mid 1600s—naming the area as “Red Point” for its red soil. The name was anglicized to Red Hook, as the Dutch word for “point” is similar to the English word for “hook” in appearance. With the construction of the Gowanus Canal, the area became very industrial and served great commercial ships. This neighborhood was the location of the famous 1954 film On the Waterfront. This movie was filmed at a time when containerization and changing economic times were forcing the port around Red Hook to become gradually abandoned. With the combination of deindustrialization and the building of the Brooklyn-Queens Expressway, the neighborhood was literally and figuratively cut off from jobs. This led to a deep depression in the area—especially among residents of the very large housing projects dominating the section.

With falling crime and increased investment throughout New York, Red Hook has benefitted. The neighborhood is the site of an IKEA furniture store and an upper-end Fairway grocery store, in addition to other new shops. An increasing population, gentrification and better transportation connections with the rest of the city are the top issues for local residents. This is the type of information you will learn on a Sight by Sam tour. To see Red Hook on a walking tour, please contact Sights by Sam at +1 (917) 242-8421 or through sightsbysam.com.