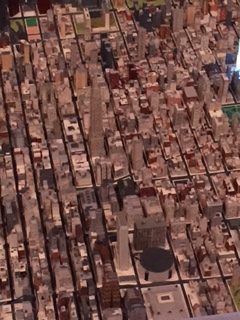 Housed in a building from the 1939 World’s Fair, the Queens Museum does a great job of explaining its past as the New York City pavilion in both the 1939 and 1964 World’s Fairs and as a temporary home of the United Nations from 1946 to 1950. This was the building where the U.N. deliberated about the formation of the State of Israel. Its site near the Unisphere of the 1964 Fair helps visitors find this unique institution. In addition to temporary exhibits relevant to residents of Queens, there are two main exhibits of note to visitors: the Panorama of New York City, which is an incredible exhibit showcasing the nearly 900,000 legal structures in the city (last updated in the early 1990s) and a map of the New York City watershed completed during the Great Depression for the 1939 Fair (but never displayed). Both the Panorama and map of the NYC watershed put the vastness of the city and the resources needed to keep it afloat into perspective. There is also an excellent collection of Tiffany lamps and memorabilia from the World’s Fairs.

In addition to the museum collection, there is also a small gift shop that has a great selection of goods about Queens and its history. The museum makes an excellent stop on an Outer Borough adventure. This is the type of information you will learn on a Sights by Sam walking tour and can be seen on a special request tour of Flushing Meadows-Corona Park.