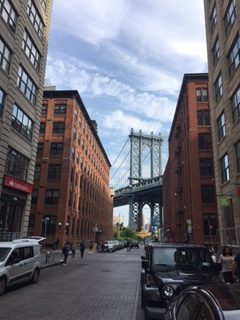 Brooklyn is the most populous of the five boroughs of the city. For most of its storied history, the borough was known for its industry. Facilities such as the Brooklyn Navy Yard and several factories producing items that included sugar, brillo pads, and pencils (to name but a few of the many commodities) dotted the landscape of Kings County. Among the most famous industrial areas (which has changed and is no longer such) is Down Under the Manhattan Bridge Overpass—or, DUMBO.

Long a manufacturing area, the DUMBO neighborhood was known by many names throughout its history. The tall lofted buildings were ideal for factories when they were built, but they became obsolete in the era after World War II. In the postwar period, the lofts were abandoned but gradually became used by artists, writers, and other creative types starting in the 1970s. Not only were the lofts sought after, but there are also cobblestone streets in the district. The great views of the Manhattan skyline, access to the subway, and the bridge led to the gradual rising popularity of the neighborhood. The DUMBO name moved from a term used by realtors to one commonly used by many in the city. A citywide reduction in crime starting in the 1990s helped to make the area more desirable to visit and live.

As the neighborhood began to increase in popularity, the rents and cost of land gradually increased. This neighborhood is now the site of several corporate headquarters such as West Elm and Etsy. DUMBO is becoming more popular with the recent completion of Brooklyn Bridge Park, bringing more people to this great part of the city. In addition to learning about this neighborhood on a Sights by Sam walking tour, see the area on our “Borough of Brooklyn” tour.