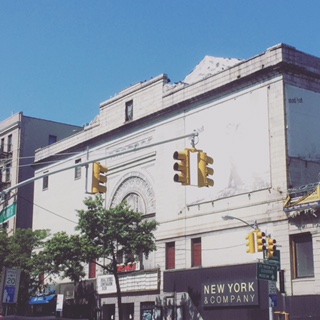 As mentioned in the previous post, the George Washington Bridge Bus Station forms a crucial lynchpin in the city’s transportation network. In addition to this building and bridge being named after our first president, the adjoining neighborhood of Washington Heights is one of the most historic and fascinating in the city. As it was a rural area for a lot of its history, stately homes and other historic sites abound in this neighborhood.

For much of its history, Washington Heights was countryside. It featured prominently in the American Revolution, as it was the headquarters for George Washington and the Continental Army during the crucial Battle of New York in the summer of 1776. The neighborhood remained relatively bucolic until the late 1800s, when property developers started to build apartments and houses. The neighborhood gradually gained population until there was a major influx of people between World War I and World War II. During this time, thousands of German and Polish Jews fled to the area, making it a haven for Central Europeans escaping from persecution. After World War II, the neighborhood would become populated by people from the Dominican Republic, creating one of the largest enclaves of people from the eastern part of Hispanola in the U.S. After falling on hard times due to the spread of crack cocaine in the 1980s, Washington Heights has been experiencing a revival in recent decades, becoming a very sought after neighborhood as land and housing prices in Manhattan continue to rise.

Washington Heights contains not only grand apartment houses but also The Cloisters (covered in another Sights by Sam blog entry), the Dyckman House, and the site of Fort Washington. In addition to learning this information on this blog, you will be able to soon tour this exciting neighborhood on a new Sights by Sam walking tour.