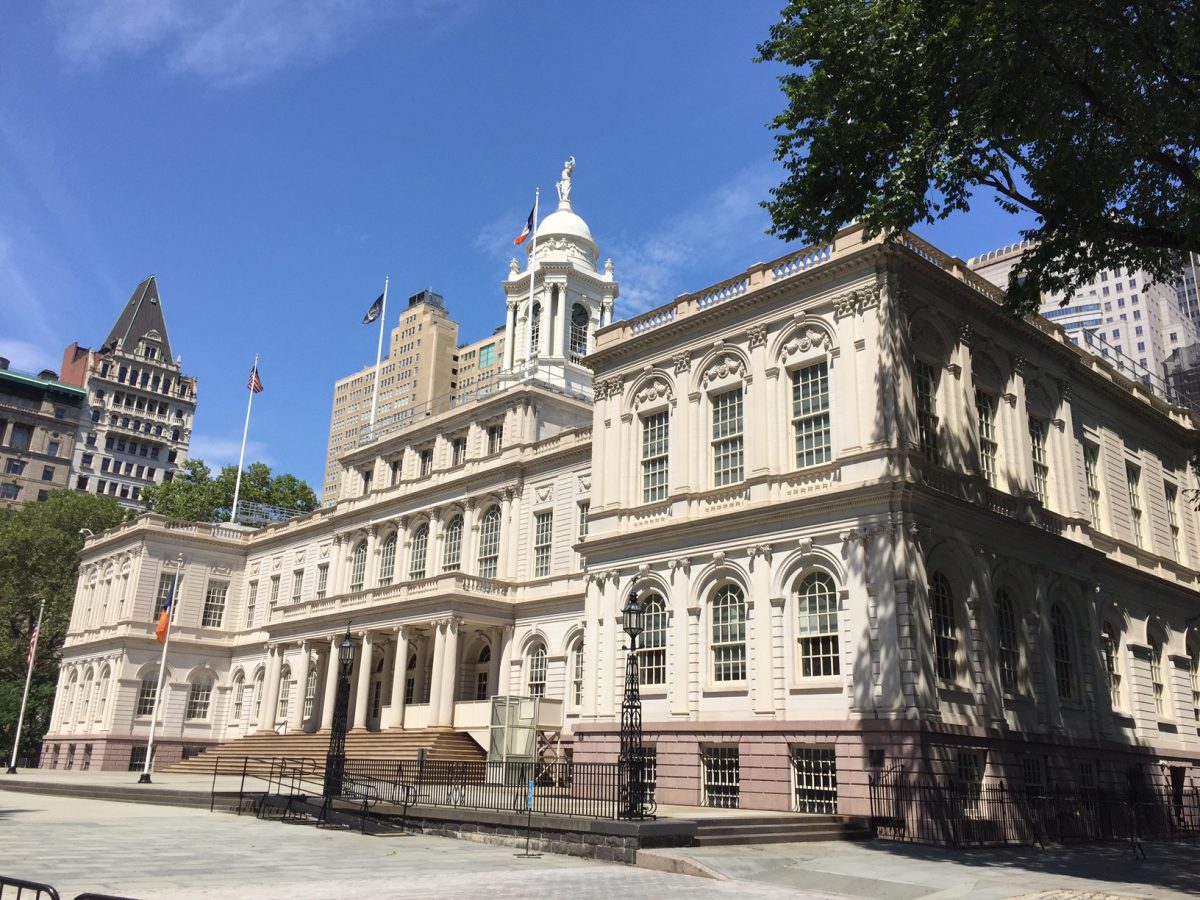 New York has been the largest city in our country since the adoption of the U.S. Constitution.  The city covers over 300 miles and has over eight million people within its borders.  Governing this city is no easy task.

In addition to an elected mayor, comptroller, and public advocate (who acts as a watchdog/ombudsman for the citizens of the city), a 51-member city council governs the city.  The council meets in a stately building located at the heart of the Manhattan Civic Center.  Built in 1811, the building was designed by Joseph-Francois Mangin and John McComb Jr..  City Hall was built at the then Northern edge of the city.  It was originally clad in marble on three sides–the northern side used another type of stone as some in the city government felt the city would never expand far enough north where people would notice (the building was restored in Alabama limestone in the 1950s).  The building is done up in a French Renaissance style on the outside.  The interior has a more English Georgian style.  The building also has a portrait collection worth millions of dollars.  The governor’s room, originally for use when the governor of New York was in the city, now houses a desk used by George Washington and a desk used by Mayor Fiorello LaGuardia (if you take my tours, you will know he is my favorite mayor).  The building is the meeting place for the City Council and used to have a second chamber for the Board of Estimate, which was declared unconstitutional in the 1980s.  The Board’s chambers are now used by the Mayor of New York.

Across City Hall Park from the City Hall is the Municipal Building.  This hulking edifice containing 1 million square feet of office space and housing a couple thousand workers was built to consolidate numerous city departments.  The building, opened in 1916 and designed by the firm of McKim, Mead, and White, is 580’ tall, has a subway station built into it, and arches made out of Guastavino tiling on the outside.  The building also has a statue at the top, the gold-covered Civic Fame, sculpted by Adolph Weinman, which symbolizes the union of the five boroughs in 1898.  The five pointed crown is evident of this.

The Municipal Building also contains one of the most unique gift shops in the city–the CityStore, which being run by the city, has gifts such as park signage, taxi medallions, and municipal books that are difficult to obtain elsewhere.

There are numerous court buildings in the area, but that will be the subject of another entry at another time.  You can learn about these on a Sights by Sam tour of Lower Manhattan.