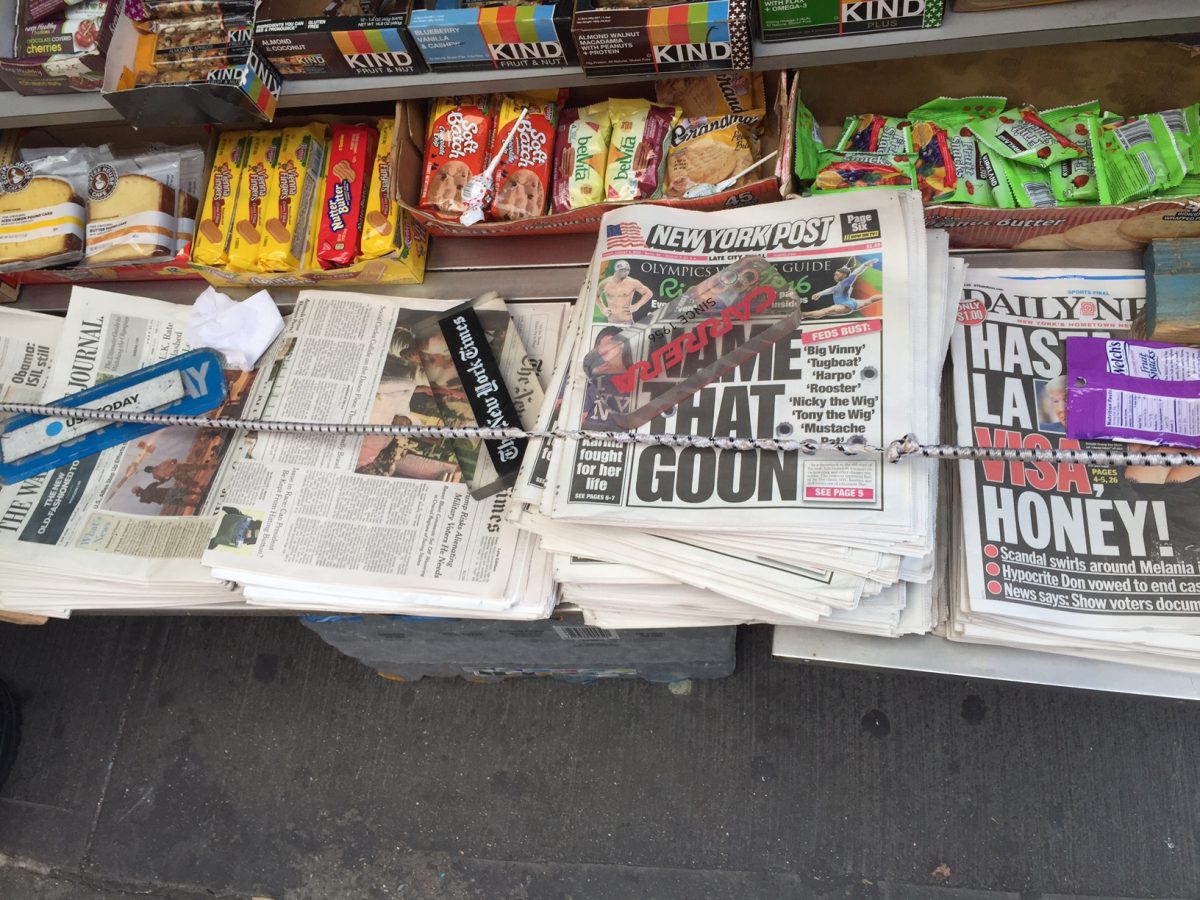 Today, most people get their news from the Internet or television.  In most places, newspapers seem like an afterthought.  Beset by declining revenues and a population that wants the news now instead of tomorrow morning, many newspapers are folding (no pun intended) or scaling back significantly.  New York is no exception to this trend, with the city having far fewer papers than in the 1940s—when nearly 40 English, German, Chinese, and Yiddish papers were published daily from the city.  But being the capital of media in the U.S., the city is home to several of the country’s most important papers.  This entry will cover some of these papers and the way that they have made an impact on the city and the country.

Founded in 1851, the New York Times is nicknamed “The Old Gray Lady.”  It is considered the paper of record of the city and has outlasted virtually every other broadsheet paper in town. The paper has a circulation of around 1.3 million and has nearly 120 Pulitzer Prizes, making it one of the most respected names in news.  While the paper initially started out as a voice for conservative and later Republican politics, it now has a very liberal bend.  The Times is famous for bringing down Tammany Hall’s Tweed ring in the late 1800s and being able to publish the Pentagon Papers in the 1970s.  Since the 1890s, the Ochs Family and their descendants have owned the paper.

Competing for broadsheet readers in the city is the financially-focused Wall Street Journal.  This paper is the nation’s largest in terms of circulation at about 2.4 million copies.  It was first published in 1889 by Dow Jones and Company as one of that company’s products.  The paper has changed hands a couple times since its founding, now being owned by the News Corporation.  The Journal has a reputation for reporting financial news in a straightforward manner and for using profile drawings of people being featured in articles for decades (still used today, but less so).  In order to become more competitive with the New York Times, the Journal has started to feature more news about New York City in recent years.  The Journal has earned over 30 Pulitzer prizes for its coverage over the years.

Although now a tabloid, the oldest continuously published newspaper in the U.S. is also published from the city.  The New York Post was founded in 1801 by Alexander Hamilton.  It was most famous in the 1800s for being edited by William Cullen Bryant, an ardent abolitionist and for whom Bryant Park in Midtown is named for.  The Post suffered declining circulation in the early  1900s—it was once affiliated with the left-wing Nation magazine.  It was bought by Rupert Murdoch in the 1970s and its editorial format changed from liberal to conservative quite sharply.  The paper is known for its rather creative headlines such as the perennially famous “Headless Body Found in Topless Bar” from the 1970s.  The Post has a circulation of around 500,000 and is locked in perpetual combat with New York’s fourth main paper, the Daily News.

Billing itself as “New York’s Picture Newspaper” (the icon on the front of its flag is an old-style camera), the Daily News has a circulation of around 500,000 as well and has a liberal editorial bend.  For many years, the paper was headquartered in a 476’ building designed by Raymond Hood on 42nd Street in Midtown that some have said was the inspiration for the Daily Planet of Superman.  The most famous headline of the Daily News is probably from the 1970s when the paper had “Ford to City: Drop Dead!” after the federal government refused to provide a financial bailout of the city in the later part of that decade.

As I mentioned before, while newspapers are facing an uncertain future,  these four papers are still among the most famous in the country.  They are joined by other papers in the city such as The Village Voice (which covers goings on in the Villages neighborhoods), New York Amsterdam News (news geared toward African Americans),  The Staten Island Advance (the only borough-specific paper left in the city) and several foreign language papers such as Der Tog (Yiddish language).  This is the type of information you will learn on a Sights by Sam tour.