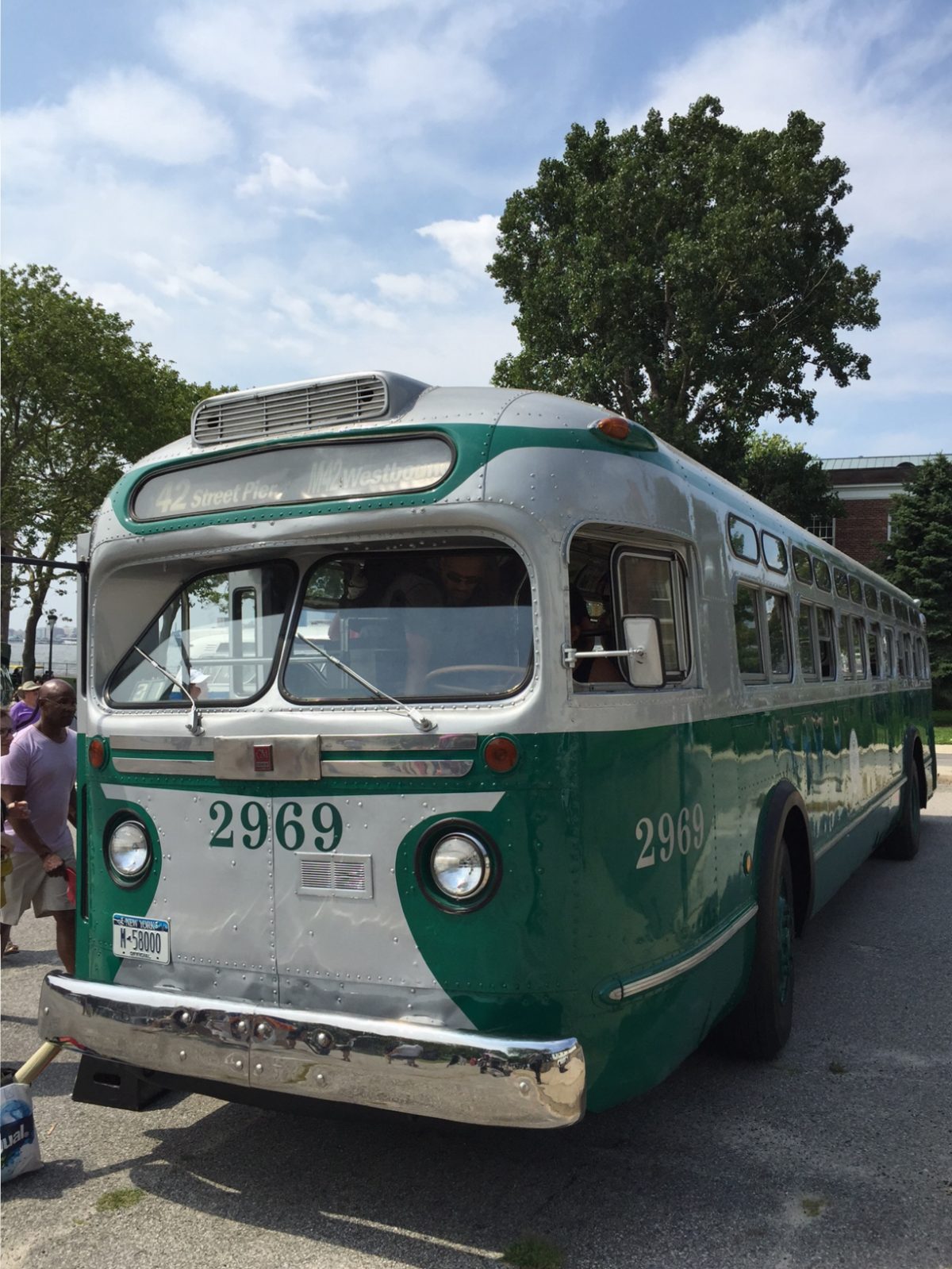 Every day, millions of people in New York take to the streets to get from point A to point B to work, play, or sightsee.  Among the well known symbols of the city are its subways that operate every day at all hours and the fleet of over 13,000 yellow taxis that ply the streets looking for fares.  Arguably the unsung heroes of the city’s transportation system are the buses that ferry travelers around the city.  This entry will deal exclusively with the city buses and related transit, not with the large intercity buses that come into Port Authority Bus Terminal or the George Washington Bridge Bus Station.

The Metropolitan Transportation Authority (MTA) manages 307 bus routes that encompass all five boroughs.  Before the consolidation of bus operations by the MTA, independent operators and then the City of New York operated bus lines.  Many of the bus lines cover former streetcar routes, especially in Manhattan and Brooklyn.  Bus routes—with a few exceptions—tend to stay within the city limits and are prefixed by the borough that they primarily serve (B=Brooklyn, Bx=Bronx, M=Manhattan, Q=Queens, and S=Staten Island).  There are also express buses between boroughs (prefixed with X).  Bus fare mirrors subway fare and is payable via a Metrocard or coins (buses do not accept cash because the coins are collected from fareboxes via a vacuum cleaner and this would shred paper money).  In the coming years, MTA is looking to add buses that allow customers to use wifi and have outlets for electronic devices.

Supplementing the city buses in certain areas of the city are smaller buses that are privately owned but connecting certain communities in the city together.  The most famous of these are the buses that go between the three New York Chinatowns (these are not the intercity Chinatown buses that go up and down the East Coast and beyond).  At terminal points such as under the Manhattan Bridge or near 8th Avenue in Brooklyn, these smaller, white-with-red Chinese lettered van sized vehicles convey mainly Chinese Americans between Flushing in Queens, Manhattan Chinatown, and Sunset Park in Brooklyn.  The fare is comparable to the subway and many regular riders feel that it gets them to their destination quicker than the subway.  Similar services exist that connect Latino or West Indian areas together.  In some areas with large Hasidic Jewish populations, there are buses that convey people between neighborhoods with high populations of Hasidic Jews.  In other communities, private operators have taken it upon themselves to ply routes down former bus lines that were cancelled.

While it is not the most romantic form of transportation in the city, the bus systems form a needed link in the city and are especially important if going crosstown in Manhattan or traveling to some areas of the city (such as some sections of the Bronx or Staten Island) where subway service is thin under the ground.  This is the type of information you will learn on a Sights by Sam tour.