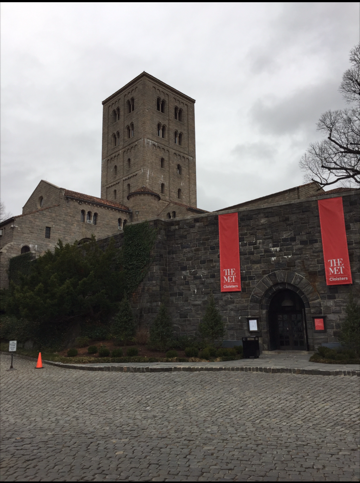 Far up the coast on the west side of Manhattan (some would say, “cloistered away”) is the dramatic Cloisters. This extension of the Metropolitan Museum of Art (the full description of this facility is in another entry), is in Fort Tryon Park with dramatic views of the Hudson River and George Washington Bridge. In its walls are valuable works of art from the Middle Ages. In addition to the art inside, the building itself is a classical work of art.

Commissioned by John D. Rockefeller, Jr. after he acquired a large quantity of Medieval art, The Cloisters was eventually built on a parcel of land 4 acres in area in Washington Heights. Rockefeller even bought land on the New Jersey side of the river to preserve the somewhat rustic view of the area from the museum. The building itself The Cloisters is housed in is from four different abbeys in the south of France built in the Middle Ages. There are additionally three chapels located in the museum that were once situated in France and Spain. The structure was completed at the end of the 1930s and houses nearly 2,000 pieces of art from the Middle Ages.

The Cloisters has a collection that includes stained glass windows, rare tapestries, and religious objects from the Medieval period. There are also many illuminated manuscripts and even one of the only known complete sets of playing cards from that era on display as well. The admission to this museum is “pay-what-you-wish” and can be combined with a visit to the main Metropolitan Museum of Art campus on Fifth Avenue for a same-day visit (linked by the MTA’s M4 bus). This is the type of information you will learn on a Sights by Sam walking tour. A tour of the building, nearby Fort Tryon Park, or other attractions in the neighborhood can be done through Sights by Sam.