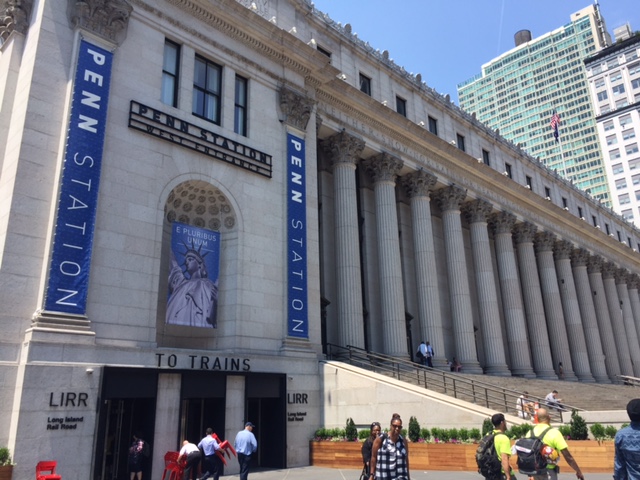 On Eighth Avenue sits the general post office building for New York. Designed by the firm of McKim, Mead, and White and completed from 1912 to 1914, this structure was named after the 53rd Postmaster General of the United States, James A. Farley. The post office covers eight acres. It is most famous for its monumental message by Herodotus (from commenting on the Persian Empire’s postal system): “Neither snow nor rain nor heat nor gloom of night stays these couriers from the swift completion of their appointed rounds”.

The post office was built over the railroad tunnels made for the Pennsylvania Station. Like similar main post offices in Washington, DC (no longer used) and in Cincinnati, the general post office was sited on a railhead to help move mail into and out of the city. Before mechanization and computerized sorting, thousands of people worked around the clock inside its vast walls. Until 2009, this post office was the only mail counter in New York that accepted letters and packages 24 hours a day, seven days per week. The interior of the building that most customers see is quite ornate and includes the seals of the United States and other countries in the early 1910s (the Austro-Hungarian Empire and Kingdom of Greece are pictured, though no longer in existence).

In recent years, there has been a movement to replace the underground (and arguably unloved by many New Yorkers) Pennsylvania Station with unused space in the Farley Post Office. This proposal is known as Moynihan Station—named after the famous New York Senator, Daniel P. Moynihan (who also grew up in the neighboring area of Hell’s Kitchen). Converting the station will cost nearly $2 billion and will accommodate Amtrak and Long Island Railroad service. The Farley Post Office is a great place from which to send a letter to friends and family about your great Sights by Sam tour. This is the type of information you will learn on a Sights by Sam tour.