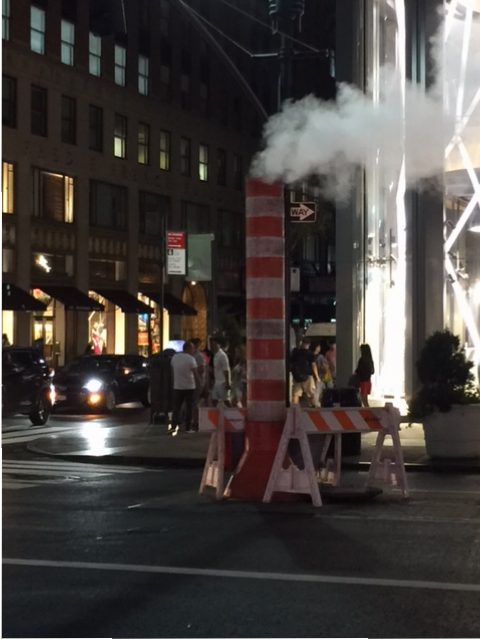 Any visitor or native to the city recognizes the plume of steam trails (often spouting out of orange-white smokestacks in Midtown) escaping from under the city and above the island.  This is the result of a vast steam power and pipe system that crisscrosses Manhattan.

The steam system is operated by Consolidated Edison, the local power company.  Utility customers from Lower Manhattan and Midtown Manhattan have access to the system.  Steam is generated at six small power plants in Manhattan and Queens and is used for heating, cooling, and some industrial processes—including dry cleaning.  It goes through 105 miles of pipes to customers all over the island. The steam is deemed as clean—some Manhattan hospitals use it to sterilize equipment.  The steam is generated as a byproduct of burning oil for power.  Every year, over 20 million pounds of steam is generated for industrial, commercial, and residential use.

The steam system has been in operation since the 1880s.  Although it is constantly being maintained, there have been several notable incidents, such as a major explosion in 2007, which caused a plume of steam to rise higher than the Chrysler Building (meaning it was higher than 1049 feet tall). These incidents are thankfully rare. Steam is used without incidence year round as it helps to alleviate pressure on the city’s power grid.   Natives and visitors to the city often come in contact with this fascinating aspect of Manhattan every day in an indirect manner.  This is the type of information you will learn on a Sights by Sam tour.